We partner with Russian scientists to study the entire western stock of Steller sea lions that extend beyond the boundaries of the United States. They monitor and maintain up to 50 remote cameras at known sea lion sites to look for marked animals.

For April, we are featuring a Russian born sea lion, M625 as our Sea Lion of the Month. She’s a popular sea lion—many of you have submitted her to our Sea Lion of the Month Nomination. She has quite the story to tell! She was born and marked on Medny Island, Russia on June 27, 2004 and weighed 64 pounds. Medny Island is a part of the Commander Islands which is located just over 200 miles northwest of the Aleutian Islands, Alaska (United States).

During her younger years, Russian scientists recorded observations of her at numerous sites on Kamchatka Peninsula. She returned to her birth place on Medny Island and gave birth to her first pup on June 13, 2010, when she was six years old. The following two years, she was observed throughout the Kamchatka Peninsula with her offspring. In 2014, she returned to Medny Island again and birthed her second pup on June 11, 2013 (when she was 9 years old). She wasn’t observed in 2014 and then only seen once in Russia in 2015 . . . 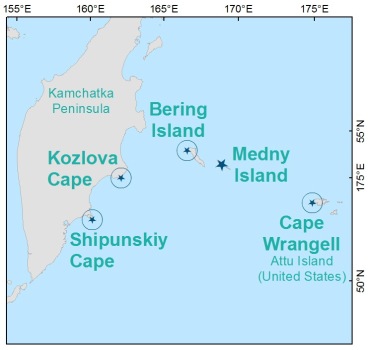 Here is where her story gets interesting. Scientists spotted her at Kozlova Cape on Kamchatka Peninsula on May 26th, 2015. The next sighting of her was captured by our remote camera on Cape Wrangell (Attu Island, US) on June 9, 2015. This same day, she gave birth to her third pup which means, in just two weeks, she traveled over 430 miles and give birth on Cape Wrangell! Aren’t these animals amazing?

We have only processed images from this site captured up to the end of June 2015 so keep an eye out for M625 and her new pup! Many of you have already been seeing her repeatedly in the images. Here’s a link to a great image reported by a fellow citizen science where you can see her with her pup (right side, middle)!

Great news: We will now share the stories of two marked sea lions (instead of just one) each month! There has been so much interest to hear the stories of marked sea lions that we need to kick it up a notch. Be sure to check-in on the 1st and 15th of every month to learn about our featured Steller sear lion. As always, you may submit the mark of your nominees to the Sea Lion of the Month forum. Thank you all for your nominations!