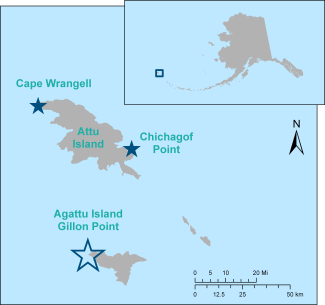 And we’re back with a Sea Lion of the Month for march! Our first for 2019. We’ve missed sharing more about these unique individuals and are happy to be back and sharing their stories with you all. Our featured sea lion is ~38 and he was nominated by a new member of our team!

As you probably know by now, the ~ means she was marked on Gillon Point on Agattu Island. This sea lion is a female that was marked on June 23, 2011. When she was marked she weighed almost 80 pounds (35.8 kg) and was almost 4 feet (115 cm) long. That’s a pretty big female pup! 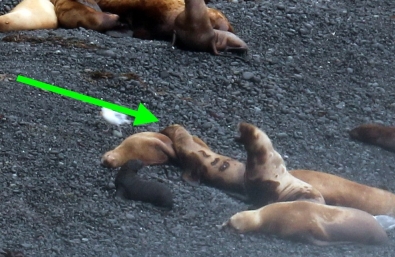 This female has been seen mostly on Cape Wrangell on Attu Island but on occasion we have seen her at the other end of the island at Chichagof Point. We have an image of this female staying with her mother and suckling until she was about three years old (August 16, 2014) at Cape Wrangell. This is a pretty significant amount of time for a juvenile to stay with their mother. It’s very likely that the mother had another pup that year and likely weaned ~38 shortly after we observed this behavior.

After that we saw her in person in 2016 at Cape Wrangell and just last summer in 2018 at Chichagof Point where it appears she could have had a juvenile of her own that was suckling from her. That would be great if she is having her own pups now. She would be about 7 years old last summer when we saw her and often time sea lions will have their first pup at around 5 years of age.

Keep an eye out for ~38 and let us know if you see her with a pup! Also, anyone seeing her back at her birthplace, Gillon Point?